September 16, 2013
I am going to talk about something real scawy!
Ready?
It is about visiting Mexico!  Now that is scawy!  hahahaha!!!

While Sam was off running around a volcano, on our second day, I was enjoying my first cup of coffee and playing with a new photo app.  Check out all these pics.

Well after about an hour of waking up and messing around it was time to get into the studio.  Let us see if I can remember how to get to Jesse's studio.

Let the adventure begin!
Yes, you too can walk by yourself in Mexico.  Well at least in San Miguel.  I feel so comfortable there.
Except for all those damn cobblestones!
I dread walking on those things.  I suggest good walking shoes.  No heels unless you want to snap your stiletto clean off!
Pay attention...
go down that way, cross here, turn there, pass the taco stand (wait!  there are lots of taco stands), and go up there.
Finally!  I arrived.

Jesse and I had lots to do.
Well he had lots to do and I was only concentrating on one thing and that was tool making.  In the picture below we are hardening the steel.
A friend wanted one of Jesse's famous Hummers (hummingbirds).  So we had to add that to the list of things to do.
She liked the Corona but did not know what wings she wanted.

Remember...it starts with a vision.  That antique roofing copper is sweeeeet!

Let the games begin!
Now it was lunch time!
You would have no idea that this place was a place to get some of the best food in town.
Located right behind that truck.
My favorite was the Longanisa which is the sausage.
Absolutely delish! 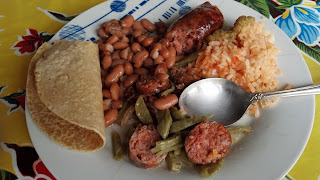 I could have really used a nap after this but we had to get back to it.
Jesse managed to make 3 stamping tools, and a hummer.  I made 1 tool and ate.  All in one day!
Not too shabby, eh?
Everything did not go exactly as planned though.  We ran out of liver of sulfur.
So basically we were SOL for LOS!  hahaha!!!
Yes!  I have jokes.

It was great passing a good time with mi amigo Jesse!  I felt like a kid going to my friends place and playing with all their toys.  We ate some fantastic honey, listened to music, talked about people, places, and things, and played with a bunch of really cool tools!

Then it was time for Pizza at La Mesa Grande.  They have a wood burning oven!
I swear that is all we did...eat, eat, and eat some more!

I want to mention that Jesse does give private lessons in metalsmith.
You can go on vacation in San Miguel and take a class with Jesse at the same time.  He can teach you just about ANYTHING!
Here is his website if you want more information.
Jesse Bert
Jesse's Facebook

Hope you enjoyed my first couple of days in San Miguel.  I miss it already.

Have a great Monday people!
ॐ