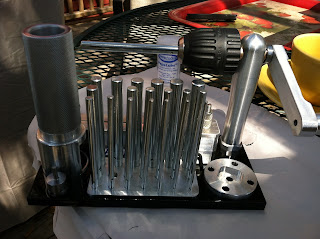 When I received my new jump ring maker I knew the new model was more compact but did not expect it to be so unstable.  It was precarious but I accepted it.  After all I will have jump rings galore with a single swipe!  The outcome outweighed the little difference and yes...I am lazy!  hahaha!!!

To the bench I go to test things out.
Test No. 1 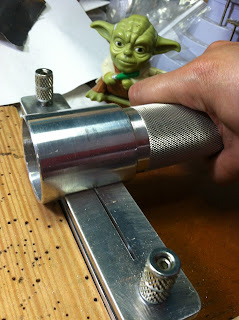 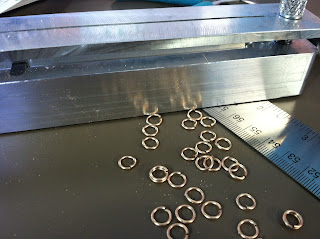 The first set of jump rings turned out great!  I was satisfied.  ☺

I then received an email saying that the top plate (cover) that came with the system was too thick and needed to be replaced.  Okay.
I receive the new plate but did not test it out until some friends were over and wanted a demo.  Well...it was difficult to place the handpiece collar over the plate.  It did not fit over the coil holding device very well.  I had to finagle it to go in and when I started sawing the handpiece did not move smoothly and the jump rings in the end literally JUMPED at me.  Upon inspection of the cover plate I noticed a lip on it.

I was totally frustrated!  So I called OttoFrei and they sent me a new cover.  Yay OttoFrei!  Those guys are the best with customer service.

Test No. 2
Everything fits nicely and I start sawing.  Man...I was smokin'!  Which I do not think is a good thing.  I test it out at least 4 more times.  I still generate smoke and the last few jump rings are not completely cut and the jump rings are still flying at me.   Mind you I am going pretty fast with my flex shaft.  The directions says to go full speed which I do not but am still going pretty fast.

I am once again frustrated!  I call my friend who has an older model and we decide to test things out.  This is when I notice the differences.

Although the newer model is more compact, for storage, it makes it easier to fall all over the place.

2.  The coil holding device is much more heavier and thus more stable on the bench when cutting.

3.  The holding collar is also heavier.

Does any of the above make a difference?  It remains to be seen.

Test No. 3
My friend happens to use another type of lube to lubricate her coils before cutting.  Which so happens to generate less smoke.  The smoke could of been the result of Pepe's lube or just generating too much heat.  I think it is the latter because I saw burn marks on the jump rings afterwards.

Results...
When using my set up I still get the jump rings flying at me and everyone within a 5 step radius but very little smoke.

I then decided that I may be tightening the nuts too tight on the coil holding device and so I try again.
After making a bajillion jump rings later, finally success!
Jump rings are not jumping out at me and little smoke is being generated. 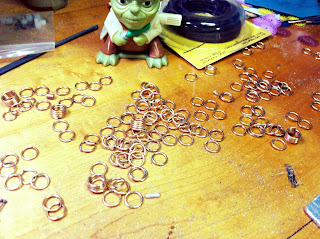 What did I do differently?
1.  Use Porter-Cable lube wax
2.  Only went half speed with the flex shaft
3.  Did not over tighten the screws on the coil holding device.
Oh...and do not forget to use a jig to hold that coil holding device in place while you saw.  Here was our set up.  A side view picture. 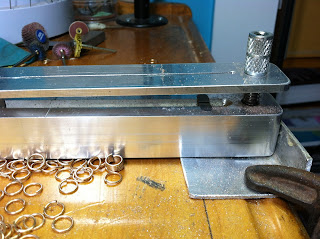 I think by over tightening the screws on the coil holding device forces the top plate down when cutting so the jump rings collapse and spits out at you.

And that is how the Cookie crumbles people!
I hope this review helps with those of you out there who own one or wants to purchase one.

I also found out the original jump ring maker is called "Jumpringer" by Ray Grossman but this still needs to be confirmed.

A big Muchas Gracias to my friend Alison for experimenting with me.  It is always nice to have a partner in crime!  ;)
Happy Hump Day All!
☮