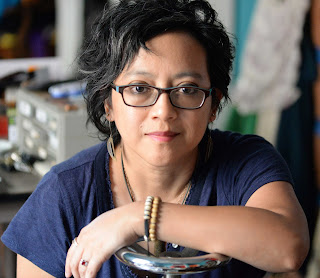 Hi, I'm Kalaya. The creator and dreamer of stuff. I have a passion for creating pieces from objects I find in New Orleans or wherever.  I love coffee, vino, and tater tots.

Kalaya has a passion for making and has been a Metalsmith since 2008.  All of her pieces are one of a kind, made in her private studio in New Orleans.  Processes include forging, fabricating, and making her own stamping tools.  She uses a variety of metals mostly silver and bronze, but also looks for other materials to play with or add conceptual weight such as wood, plastic, and artifacts found here in New Orleans or during her travels.

As a young adult Kalaya explored the Sonoran Desert in the Southwest.  Learning about her Native American and Thai roots led her to a fascination with myth, talismans, and amulets.  Being born into a military family led her to live a nomadic life.  She attended three different high schools on her way to earning a BS in Microbiology from Northwestern State University in Louisiana.  In 1992 New Orleans claimed her as her own.  She studied Fine Arts at Delgado Community College under Margo Manning, apprenticed with local artist Becky Burt and attended master workshops at StudioFLUX in New Orleans, the Revere Academy of Jewelry Arts in San Francisco and Arrowmont School of Arts and Crafts in Tennessee.

Kalaya migrates towards making pieces that have an organic feel.  Her inspiration comes mostly from nature and sacred symbols.  At least once a year the winds of the desert and Mexico call her back home.  There you can usually catch up with her in San Miguel de Allende eating a tamale.

I know from previous experience that I had to ask the driver to stop at a grocery store before dropping us off at Arrowmont.  I was feeling so good about having all my ducks in order and then this happened! I'm sure I screamed WTH because everyone was looking at me but I wasn't the only one in shock.
I was thinking...great!  Now I will have to walk to get my wine.  LOL!!!

Mandalas have been on my mind a lot lately.  Struggling to find my truth.  I find making these in the studio calms me.
Even though I knew that hard solder melts at 1450 degrees I still had to try enameling the copper.  In theory the solder should not have run.  If I only took it out of the kiln a minute sooner this may not have happened. A total melt down but I love that color!  :) My intention for the above mandala was a ring.  The challenge was difficult but I managed to make it. I feel myself pivoting once again and feeling the need to create amulets and talismans but in sculpture form.

I'm getting all up there with my new Olloclip.
It just clips on to my iPhone 5S.  I think that is an adapter for the skinnier version of the phone.  I wanted something easier to carry around other then the massive camera to take real close ups.
Here's what I've done so far.