September 14, 2012
Over the next few days I will post about our journey south of the border to San Miguel de Allende, Mexico.  There is so much I would like to share but I just do not know where to begin.
I guess I should start at the beginning, eh?

We went to San Miguel for two reasons the elevation and to visit our friend and artist Jesse Bert.

Waking up in San Miguel was absolutely beautiful.  The temperature was cool, as compared to our New Orleans heat in August, and I was finally taking a much needed break from summer.  There are clouds about but it is rainy season, and there were just sprinkles every now and then, not downpours.
First thing we did was EAT!  We ate at this scrumptious breakfast place called Cafeteria Los Bisquets.  Yuumm...I can taste it still.
Next thing was to send Sam (my Sweets) off on his running trail.  Then Jesse and I hunted for obsidian arrow heads at the foot of a mountain.  Not an easy task mind you.  There were big fire ants all about.  I never seen them that big and red before!  Jesse said, "just don't stand still".  Okay...noted!

I found a lot of shards but no arrowhead....boooo!!!
Now it was time to stop messing around and get in the studio!  On our way to Jesse's studio we passed by this beautiful church.  I think it is the oldest in San Miguel.  This is about as close as I got to it.  hahaha! 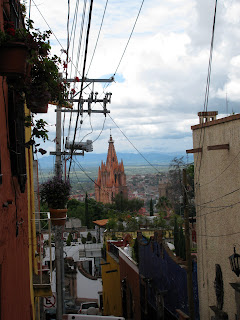 We had to hurry and get back because there was someone waiting at the studio to meet me.  Her name is Ms. Catrina.  Wow!  Talk about a beauty!  Made from found objects.  I guess you can say she is made from San Miguel herself!

She said she was excited to make the trip back to New Orleans with me so she can make her debut at Thomas Mann's Gallery during Art for Arts' Sake. Yay!
A peek inside Jesse's studio... 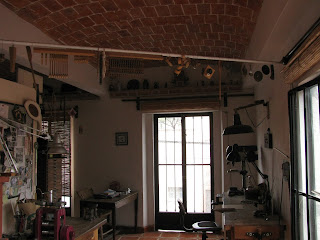 Look how nice and orderly everything is!  I believe it looks like that ALL the time.  Such a neato!

Finishing up some components...
Check out that riveting hammer.  Jesse makes them himself.  I LOVE it and use it for all my riveting.
Did not do much on this first day.  We did do a lot of catching up and I did a lot of looking around.  So many things to see in there.

This wraps it up for part 1 of San Miguel de Allende.
Have a wonderful Friday and weekend!
♥
Namaste
Kalaya