Back in January of 2012 I said to myself..."self you best start making pieces for the holidays."  Then it was summer, vacations, then all of a sudden dia de los muertos, and the next thing I knew it was Thanksgiving.  After Thanksgiving time was moving at light speed!

And then it was December when my old skin started to shed.  It was time for change and it is something when you have help to transform.
I was given the opportunity to truly follow my bliss and it was something scary!

"The old skin has to shed before the new one can come."
~Joseph Campbell

After Thanksgiving was my first trunk show ever!
I had no clue what I was doing but one thing was clear...I had to have inventory 2 weeks from Thanksgiving.  This is when anxiety sets in, and the entire studio is in utter chaos, and everything else in life gets ignored! 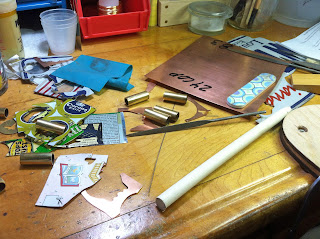 That was a picture of only one bench.  You should of seen the other two!

In my last post I mentioned all those TinSkulls and enameled pendants.  Also, made bullet charms which turned into earrings.  But to be honest I had a wonderful time making these hoop earrings...
At first I placed the hoop on a jump ring and then on to an ear wire.  Unfortunatly the stones on the big hoop did not stay centered.  Then I remembered!  Stacie Florer showing me how to make these cold connection for the ear wires!  Yay Stacie!!!  They worked like a charm.

And...I had a great time figuring out the display situation.  Instead of going out and spending extra money I used what was in the house.

I used an old shadow box.  All I did was replace the linen inside the box and instant display case... 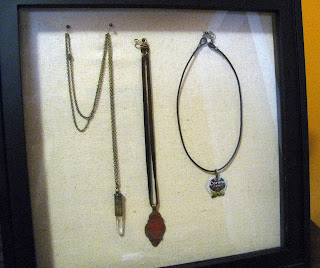 Problem with the shadow box is having to go in and out of it.  Maybe one could only display their most expensive pieces in them.

I also had old cork boards sitting around.  First I stabilized them by cutting a solid piece of board to fit on the back of the cork board and wrapped linen around them and secured it using a staple gun on the backside. 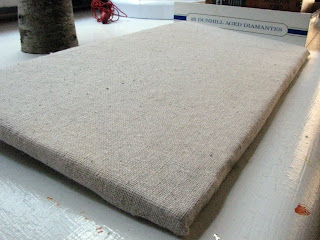 I did not take a picture of my very FIRST trunk show display.  Boooo!!!  I guess I was too wrapped up in the moment.

I had a great time getting the display all together and now I think I am ready to do a market!  Eeeee!!!