South of the Border Part Dos!

September 20, 2012
A river doesn't hold all the water
that passes through it.

I am about to share the most wonderful day we had in San Miguel.  There are no words to describe it but to say it was magical and I would very much like to have that day back.  I do know that this is not possible and as I try to hold on to things, i.e. dried flowers...as a reminder of that day, I need not carry them.  This is why I put the quote above.  Because the river does not and cannot hold on to the water.  For the river is wise and knows that the water has already shaped it.  I like to think that the people I meet represent the water in the river and them coming into my life, if even for a brief moment, has shaped me.  I will carry those moments always...oh and those four leaf clovers Kent gave us, and a rock that Jesse found, drilled and put a tube rivet through, from our adventure!  hehehehe
♥
Enter with an open heart...
We did not have to go far to find a blue mushroom!  I did not know they even existed!  I thought they were the most beautiful.

Look closely at this picture.  Do you see all those dark spots on the ground?  That be some BIG fire ants!  Ximena was picking off crystals that the ants carry back to their pile.  No way you would catch me doing that because if they bite...I do not even want to think about it!
Ohhh...what we do for art!
We were out shroom hunting for about 2.5 hours.  I was exhausted AND hungry!  So what do we do now besides have a glass of vino?  Well...shrooms had to be Kent CERTIFIED!  We had to know which ones we could eat and which ones would kill us and only Kent knew. 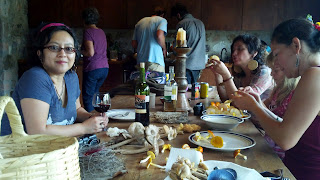 First, after the identification, the shrooms had to be cleaned off using a damp towel.  The shrooms were not rinsed in water.  I think Kent (chef) said not to do that.  It would decrease the flavor of the shroom.  We would not want to do that!
So what was this magical day all about?

Spending time with old friends...
and making new ones...
I would like to mention Zachary Ennis in the above picture.  He is a blacksmith in San Miguel de Allende.  I will talk about him a little later to give all of you the scoop on this Rock Star!  In the meantime he can be found here.  Zach's work is AMAZING!!!