May 27, 2011
I have BIG plans for this weekend.
It's going to be three days of studio time!  Well...at least that's the plan.  Someone might convince me to go shopping or something.  In the meantime let me share the newest things that I have made.
A friend of mine wanted to venture out and get herself some dangle earrings but they couldn't be over 1 inch long.  While I was making the set my muse came in the room!  She told me to put some notches in the hoops.  So I obeyed and left the two other pairs alone.  You never know when she is going to pop her head in the studio.

The silver hoops are 3/4 of an inch in diameter and were made using 16 gauge round wire.  I made three pairs.  Notches were created in one pair and patinated with liver of sulfur.  The other two pair were left alone and tumbled for that shinny look.
I feel like the other two pair needs that je na sais quoi.
Maybe some enamel dangles hanging from the hoop?
Or
Oh...I know...some round balls around the hoops.  I don't know.  I'm going to try something.
Sometimes even though you are finished with a piece, you still may not be finished.
I made this enamel heart last year and finally put a 16" silver chain with a hand made toggle clasp on it.  Toggle clasps have become my favorite choice for closures on necklaces.  I find that it doesn't creep to the front...at least not yet. 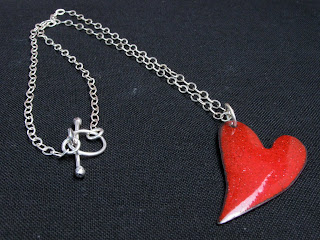 The backside has an infinity symbol.  What other way to express how your love is infinite? 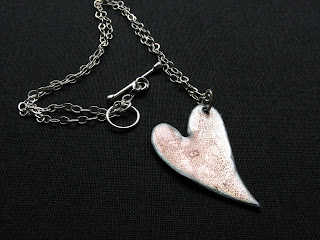 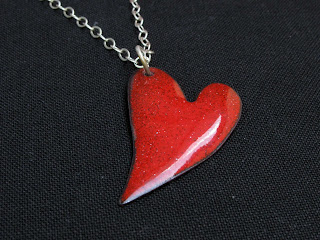 That's it for now.  Have a great Friday!
Namaste
Kalaya