South of the Border Part Tres

October 04, 2012
I think we were in the studio a total of three days (2 half days and 1 full day).  After all, we were in Mexico and cannot spend the whole week in the studio!  Okay...well...we could but there were places to go and people to see.

First day...
Like I said in an earlier post...the first day in the studio was a lot of looking around.  We decided that I needed a belt buckle since we were doing a workshop in November.  I could not go around without my very own buckle!

First decision was to decide on shape and size.  Second decision was what objects were going to embellish the buckle.  These sorts of details usually plague me for days.  I just cannot make things up on the spot!  I did bring along a skeleton from NOLA but that was it.  I then went to Jesse's stash of found objects looking for things to use. 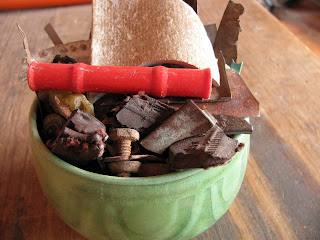 What in the world would I find in that bowl of found objects?  I guess what found me were two metal objects, a rusty thing and a tin thing.  I also wanted a stone so I snaked a Baviacora Blue Ridge turquoise as well!  hehehe!!! 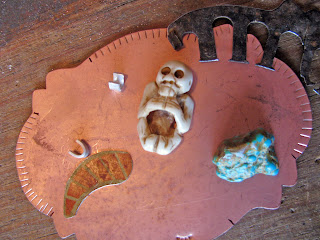 That was it for the first day in the studio, design and prep work.  Took me FOREVER to saw and file that back plate (which will be the buckle).

Second day...
Now for the hard part...soldering!  Soldering is always a challenge for me.  We needed to solder the loop and make the pointy thing.  The prong that goes through the hoop of the belt.  Also needed to make a bezel for that turquoise.
At the end of the day we were pretty satisfied.  We had the loops and prong on the back soldered...even though we had to solder that prong again.  I told you soldering was a challenge for me!  The bezel was done and all we had left was to put everything together. 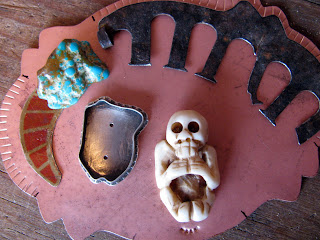 Third day...the day before I have to leave.
Oh the stress!  Only one day to complete everything.
We started at 8:30 in the morning.  What was I thinking?!

As you can see in the picture there is some metal sticking up which had to be sawed off or flattened.  Then we had to try and think of a way to cover that rusty metal.  The points were sticking out and we just knew it would snag clothes.

Jesse decided on Plexiglass to protect the clothing from the points.  The Plexiglass would have to be conformed to the arch of the buckle.  We were not sure if Plexiglass bent or not but we were about to find out.  We heated it with a heat gun and bent it slowly.  It worked perfectly!

We managed to finish in 4 hours. 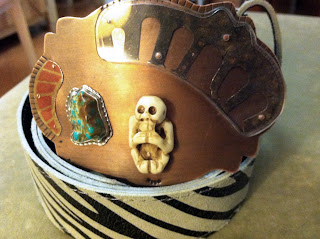 Enough time to go find a leather belt, relax, have a glass of wine and enjoy the rest of the evening.
Wow!
The journey to San Miguel de Allende was beautiful.
It was so much fun I am still in disbelief.
The hardest part of the whole trip was this... 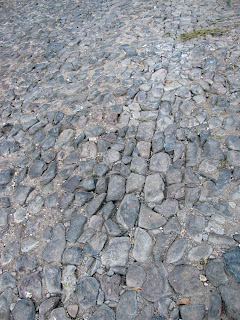 Cobblestone EVERYWHERE!  I had a hard time walking on them.  So if you go to visit I do not recommend stiletto heels!